You want results, I know what works.

Join hundreds of others. Subscribe to get actionable copywriting tips to up-level your writing. 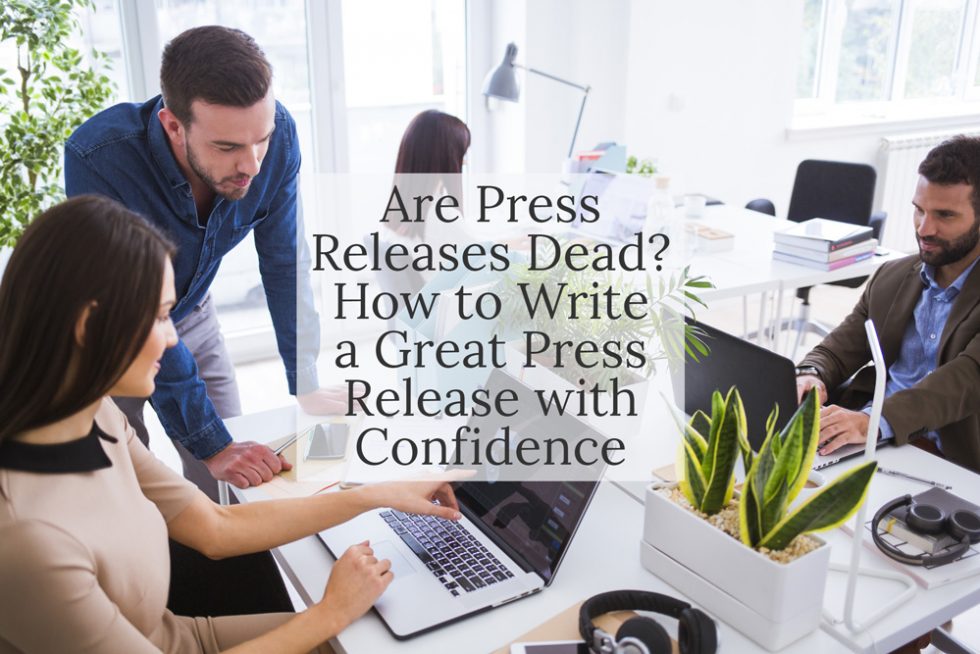 6 Tips (From a Copywriter) to Write a Great Press Release

Over the past two weeks, I’ve been writing an annual report for one of my clients. That means I’ve spent hours – maybe days – sifting through their press releases, tagging interesting content, and summarizing them for the report.

Spending so much time around press releases has got me thinking: are press releases as useful today as they once were? A strong, well-written press release can garner media attention and get more eyes on your business. If a journalist picks up your press release, you might be featured in a trade publication, blog post, or podcast that covers your industry. This can open the door to increased visibility with customers and investors. It can also position you as a credible industry expert.

HOWEVER, the way companies distribute their news has changed dramatically in the last decade with the rise of content marketing and social media. This has led some to say that press releases are dead. But I don’t completely buy that. I think it just means that it’s more important now than ever to be crystal-clear on when and how to issue a press release.

If you’re thinking about writing a press release for your business, here’s the secret: do it for the right reasons and do it systematically following these steps.

1. Determine if a press release is right for you

A few years ago, you may have heard the buzz around press releases and search engine optimization (SEO). For a short time, it was possible to distribute a press release that contained a link to your website, have the press released picked up and published by a third party site, and gain a backlink to your website. This, of course, would boost your SEO. However, the tactic wasn’t all that ethical. When Google realized what was happening, they began to penalize for it. Press release distribution companies followed suit by using no-follow links in press releases. Together, these two things quickly brought an end to the practice. So, that means if you were hoping to gain direct SEO primarily through press releases, think again!

That aside, there are still many important reasons to issue a press release.

An article by PR Newswire suggests you may want to consider a press release to:

Do any of these reasons resonate with you? Another thing to keep in mind is that it’s relatively inexpensive to produce and distribute a press release, especially compared to running an advertising campaign.

The next thing to do is to narrow your content. For maximum impact, a press release should have a specific focus and only cover one story at a time.

If you’re not sure what to write about, or if you’re wondering whether your story is newsworthy, don’t worry – you’re not alone. It’s a common concern. To get your PR juices flowing, I’ve summarized below some great ideas that were presented in a popular article, written by Al Lautenslager, for “Entrepreneur”. Even though the article dates back more than a decade, it’s still one of my go-to reference tools.

Also, be scared of getting creative with your press releases. This is one of my favourite case studies from Bob Bly’s “The Copywriter’s Handbook”. It illustrates that press release can be fun and creative while also gaining major publicity:

Often copywriters are faced with a client who wants publicity and asks us to write a press release, but has nothing new to report. In such instances, a creative publicist or copywriter can manufacture a hook or angle strong enough to gain the media’s attention. For instance, when Jericho Communications, a New York City PR firm, was looking for a way to gain publicity for their client Domino’s Pizza, someone said, “When we work at night, we order pizza. Maybe the White House does the same thing. Can we see whether pizza deliveries to the White House increase when there is a national emergency?” Sure enough, they did. And Jericho created the “Pizza Meter,” publicizing the fact that you could judge the state of the nation by the volume of pizza delivery to the White House. The tactic was successful, garnering major media coverage for the pizza maker. (p. 211)

Thinking outside the box can produce amazing results.

What’s going to first attract the attention of journalist, investors, and customers?

After your headline, comes your lead.

A lead (or lede) is the first sentence or two of the body of your press release where you sum up the “5Ws” – “who”, “what”, “when”, “where”, “why” – and the “how”. It’s important to write a strong lead. Not only does it immediately tell the reader what your story is about, it also conveys your key message in a short snippet, should a publication chop off the rest of your story.

Next comes the body of your press release.

This is where your story unravels, and you draw the reader down the page. It’s a good idea to include a powerful quote or two, either from the CEO of your company or another person relevant to the story. Using a quote allows you to show your company’s position on the story, and develop your company’s unique voice.

Other than in the quote, try to avoid the use of “I” or “we” in the press release.

Finally, when writing a press release, it’s important to remember that your story should be positioned as a news story – not as advertising. Readers are incredibly savvy and will pick out language that sounds sales-y in nature. If your press release is all sales and no news, it will be discredited – wasting your time and money.

4. Format your press release to fit

This is a simple – but important – step. Format a press release wrong, and you’ll come off looking like a novice.

Here’s a checklist to make sure you’ve covered your bases:

None of this is absolutely necessary. But a common, recognizable format will help your readers understand your message.

5. Edit your press release – more than once!

It’s very important to use correct spelling and grammar in a press release. Edit it several times to make sure you’ve eliminated all errors. When I edit a document, I like to edit it the first time on my computer screen, the second time on a printed hard copy, and the third time by reading it aloud.

Once a press release is distributed, it can always be retracted. Or you can issue a correction. But neither are ideal. Once your press release is out, it’s out! It’s best to avoid mistakes altogether by ensuring your editing process is solid.

While you’re editing, also look for any adjectives that you can eliminate. This includes words like “best”, “great”, “special,” “important,” and so on. This sort of language – while it may be suited to marketing – is a turn-off to readers who are looking for news.

When you’re happy with your press release and ready to send it out, the final thing to take care of is distribution.

While there are many options for this, choosing a large, well-known distribution service is your best bet. They will offer you news wire services, online posting, and targeted list distribution. They will also help determine a distribution plan that makes sense for your business, and ensure your content is formatted and approved properly for the wire.

Once your press release has been distributed, it’s a good idea to email the press release yourself to any media contacts you have, and promote it on your business blog and social media channels. This will help you get the best bang for your buck.

Now it’s over to you: Do you have any secret tips on creating great press releases? Or, how about examples of creative press releases that got stellar results?